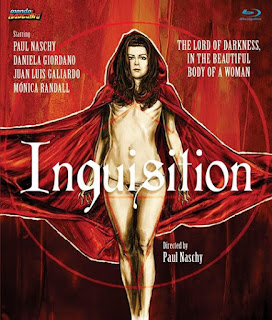 Mondo Macabro has announced the specs for their first of two Paul Naschy releases (with 1979's EL CAMINANTE following later this year) as INQUISITION from 1978 will be released this April/May.

Written and directed by Naschy under his Jacinto Molina moniker its a period piece concerning a with a witch hunter (Naschy) who falls under the spell of local beauty Daniela Giordana (YOUR VICE IS A LOCKED ROOM AND ONLY I HAVE THE KEY) who in reality was sent by Satan to destroy him.
Packed with nudity, blood and that wonderful Spanish horror Gothic atmosphere it should look ravishing with Mondo's new HD transfer.

FROM HELL IT CAME Is Shambling Into Your Blu-Ray Player ! 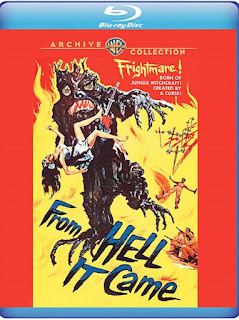 Coming from Warner Archive later this year is the greatest monster tree movie ever made. Sporting a newly remastered 1:78.1 HD transfer 1957's FROM HELL IT CAME comes as a surprise announcement and coming so soon after their release of VALLEY OF GAWNGI and WORLD WITHOUT END hopefully this will mean future releases are in the works from their classic horror sci-fi library (in particular as in the case here from the rich Allied Artists archives).
Originally released on a double bill with THE DISEMBODIED (also available from Warner Archives), this wonderfully entertaining and woefully inept slice of 1950's drive-in horror is fully endorsed by the evil Tabanga. 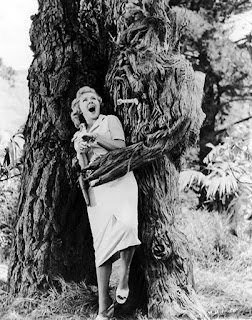 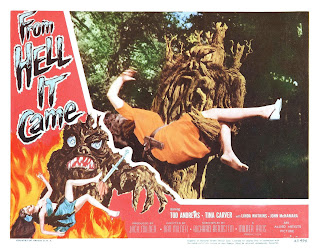 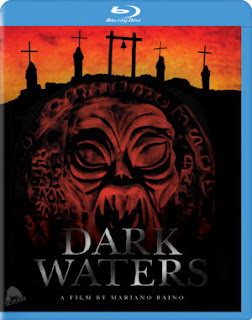 Coming April 11 from Severin Films is this atmospheric and creepy slice of Lovecraftian horror.  A UK/Italian/Russian co-production directed by Mario Baino, its Italian roots have lent it to be labeled as one of the last gasps from the golden age of Euro-horror.
Filmed in the Ukraine, its a beautiful looking film that should translate well to HD. The plot concerns a young woman played by Louise Salter (INTERVIEW WITH A VAMPIRE) who after the death of her father travels to her place of birth which is a remote island containing a reclusive group of nuns who hold strange rituals in an attempt to guard "something"
Oozing Gothic atmosphere with a strong Lovecraft vibe, it rewards with attentive viewing and hopefully this release will bring it to a wider audience.
On the same day Severin is also releasing Bruno Mattei's nunsploitation classic THE OTHER HELL. Sounds like a great double feature. 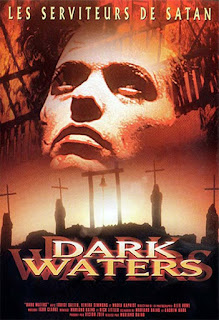 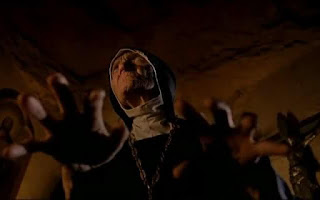 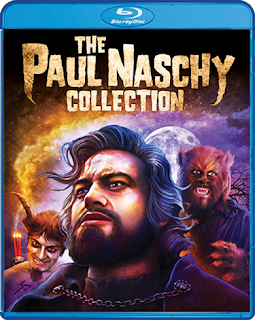 Shout Factory  has announced a very cool release for June 20 of a Paul Naschy box containing five (!) of the master of Spanish horror classic films including VENGEANCE OF THE ZOMBIES (1972), HORROR RISES FROM THE TOMB (1972), the giallo influenced BLUE EYES OF THE BROKEN DOLL, NIGHT OF THE WEREWOLF (1980) and HUMAN BEASTS (1980). All will be uncut from new HD masters and will feature extras such as alternate credits, deleted scenes and the alternate "clothed" sequences all where applicable.

In addition,Code Red recently announced over on their Facebook page an upcoming release of these three classics from the golden age of Spanish horror and again all starring the great Paul Naschy. Containing Naschy's ultra gory take on the Mummy mythos THE VENGEANCE OF THE MUMMY from 1975 (which has the welcomed presence of Helga Liné & Jack Taylor), 1972's THE FURY OF THE WOLFMAN and the 1970 Spanish/German/Italian take on the classic Universal monster mash-ups ASSIGNMENT TERROR all of which make for 2017 to be a bloody fun year for fans of Spanish horror - plus anytime we get more Helga Line in HD, its time for applause. 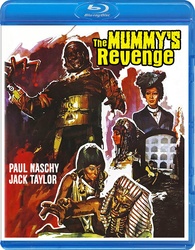 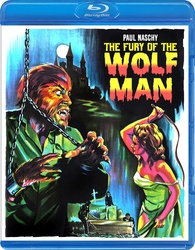 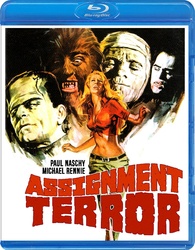 THE MAN WHO COULD CHEAT DEATH 1959 On Blu 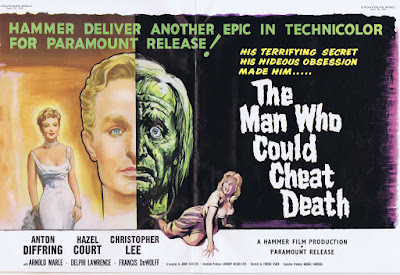 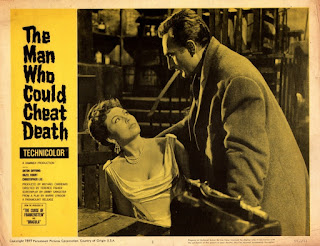 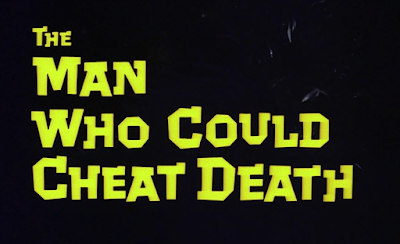 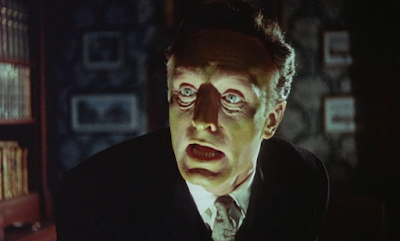 This lesser known Hammer production is the recent recipient of a new Blu-ray release courtesy of Kino Lorber. Previously available from Legend Films in a double feature Blu where it was paired with Freddie Francis's superb THE SKULL (another new Kino release), it's a bit of a strange misfire from the famous British horror studio. Not a bad film in the broadest sense, it just seems to be lacking is some respects as if all the participants both in front and behind the camera brought only their "B" game to the proceedings.
Like most Hammer productions it's interminably set bound, but missing the usual opulent set production that helped elevate their other films in spite of the somewhat meager budgets. Lacking any sort of sympathetic character it's oddly rather flat and lifeless and is hampered by a talky middle portion that slows the plot down.
With all that being said, it is a Terence Fisher Hammer Gothic with Christopher Lee and Hazel Court making it a worthy viewing experience with some excellent lighting effects (the green tinged lighting in certain sequences bring to mind Mario Bava's later work) and gruesome dead skin make-up effects, but there's a certain aura of "what if" hanging over the project - especially in the case of the lead.
Citing exhaustion Peter Cushing had dropped out of the film shortly before shooting was to commence and in his place the studio brought in German character actor Anton Diffring (CIRCUS OF HORRORS). An excellent actor with a cold aristocratic presence who specialized in evilly icy villains and Nazis, here he plays Dr. Georges Bonnet who is able to prolong his life indefinably (now at 104) by means of gland transplant taken from a living female "donor" every 10 years and by periodic sips from a green elixir he keeps hidden in a safe. 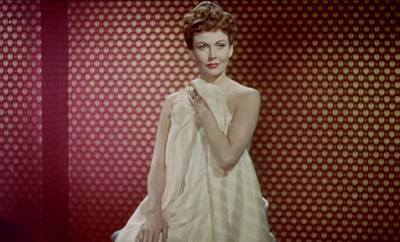 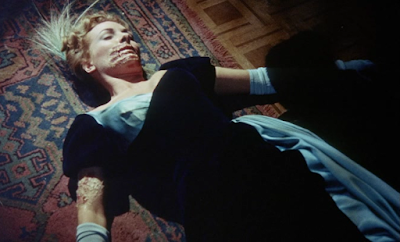 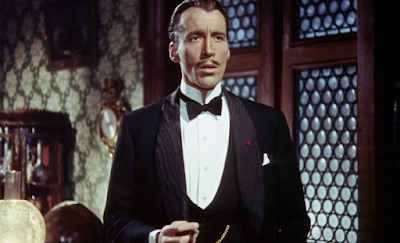 Living in Paris, he's also a talented sculptor and has reconnected with previous lover Janine Du Bois (the luminous Hazel Court from THE CURSE OF FRANKENSTEIN) after unveiling an older sculpture of her which puts him into conflict with her current suitor Dr. Pierre Gerrard (Christopher Lee). Coming up on the due date for his new operation Bonnet awaits the arrival of his longtime surgeon & friend Dr. Ludwig Weiss (Arnold Marle THE ABOMINABLE SNOWMAN). However upon arriving Weiss confesses that he's to old and infirm to conduct the surgery which necessitates Bonnett looking for a new surgeon in the form of Christopher Lee's character and perhaps having his past history of a trail of murdered women uncovered.
In the lead role Diffring brings the right amount of evilness boarding on madness to the role but lakes the pathos that perhaps Cushing would have brought to the character. There's a great deal talk about the ramifications of immortality and outliving your peers and although Diffring plays his role superbly he does can't bring a touch of humanity to it and although Lee and Court do their best (ably assisted by the wonderful Francis De Wolff as a police inspector) but their roles are both cold with Court in particular dealing with a what script has as shrill, bitchy type character, but what should be the sympathetic heroine.
Co-produced by Paramount it was based upon their 1945 film THE MAN IN HALF MOON STREET (which in turn was based up on a play by Barre Lyndon) and the script by Jimmy Sangster could have used some more Hammer atmosphere about it which in turn may have inspired Terence Fisher a bit more. The 1975 TV film THE NIGHT STRANGLER uses some of the same plot points.
The new blu-ray by Kino is a fine looking presentation of the film with a 1.66 transfer and after the murky looking opening credits the disc has strong colors and sharp details through the remainder. It also includes a commentary by film historian Troy Howarth and interviews with Hammer scholars Kim Newman and Jonathan Rigby.
Hazel Court filmed a topless scene for the "continental" market which has yet to appear on home video (although stills have surfaced) and Diffring appeared in an unsold TV pilot titled TALES OF FRANKENSTEIN in 1958 which was to be an ongoing series based upon the Frankenstein legends wan was to be co-produced by Hammer and Columbia Studios. 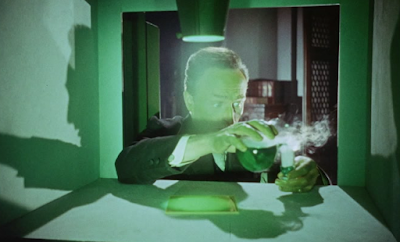 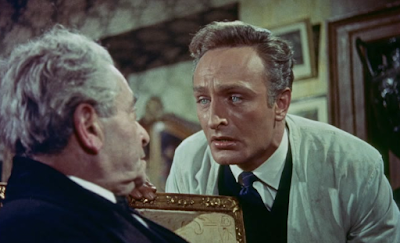 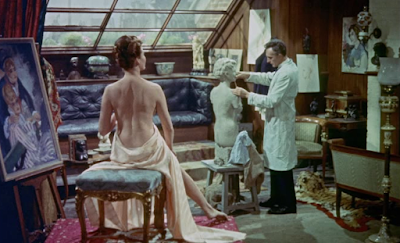 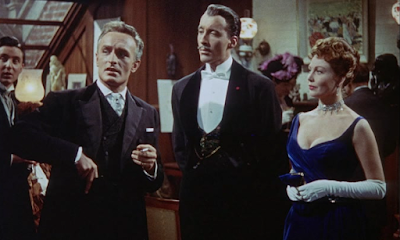 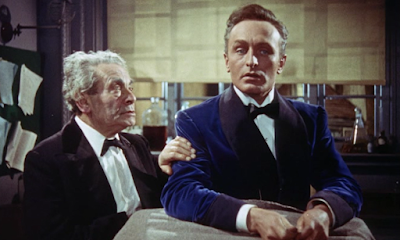 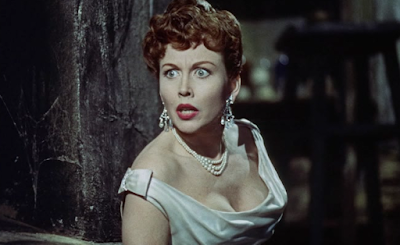 The Wonders Of "CineMagic" in HD !! THE ANGRY RED PLANET Is Coming 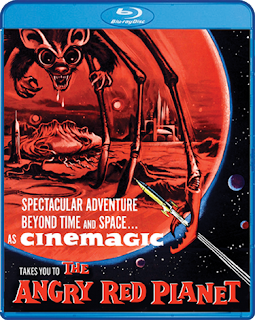 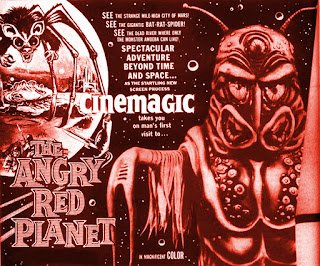 On June 24 Shout Factory is releasing the wonders of Sid Pink's THE ANGRY RED PLANET on Blu-Ray so that we may behold the wonders of CineMagic in glorious HD. Conceived by producer Pink and producer/director (and comic book artist) Norman Mauer its combination of animated backgrounds, solarisation of a B&W negative and a red tinting was suppose to create a 3D type effect but the process did quite work out with the end result being one the most bizarre and unique looking films in sci-fi history.
Directed by Ib Melchior (THE TIME TRAVELERS) the plot follows a budget impoverished journey to the red planet led by hairy chested lounge lizard Gerald Mohr (TERROR IN THE HAUNTED HOUSE) along with the serious pipe smoking older scientist (Les Tremayne THE MONOLITH MONSTERS), comedy relief and second banana Jack Kruschen (THE WAR OF THE WORLDS) and love interest Nora Hayden (HIGH SCHOOL CONFIDENTIAL)- who seems to spend the entire movie getting pawed by Mahler and fielding his cheesy pick-up lines.
Part of the inspiration for Larry Weiss's sequence in AMAZON WOMEN ON THE MOON it boasts some of the most mind boggling bizarre alien creatures ever devised including a three eye martian, a huge crawling amoeba with a rotating eyeball and best of all that huge rat bat spider thing.
The 1.66 Eastman color should look gorgeous in HD and it would be nice if Shout could spring for some extras as this practically cries out for a Tom weaver commentary. 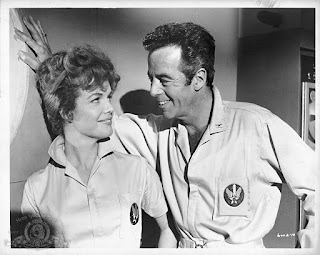 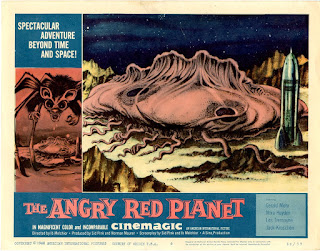 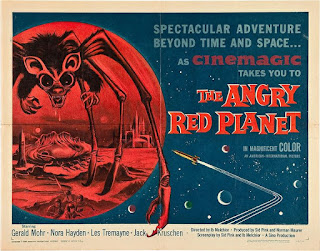 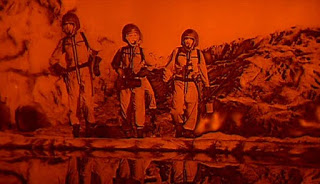