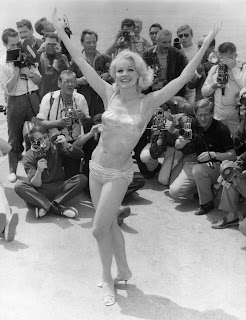 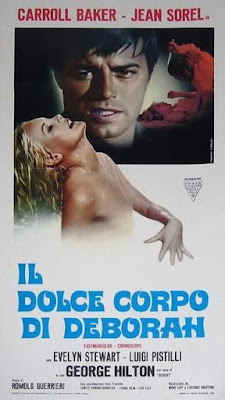 Happy Birthday Giallo Goddess Carroll Baker !! Sure she made bunches of stuff in Hollywood, but Carroll went over to Italy in the late 60's to make a series of Giallo films (in which she proudly shed her clothes) with the best of them being directed by Umberto Lenzi. She was one of the first American stars to make that journey. I got to meet her at a Chiller Con back in the 90's and she was beyond sweet as she patiently answered all my Giallo-geek questions. She starred in THE SWEET BODY OF DEBORAH 1968, ORGASMO 1969, SO SWEET...SO PREVERSE 1969, PARANOIA 1970, KNIFE OF ICE 1972 & BABY YAGA 1973 among others. 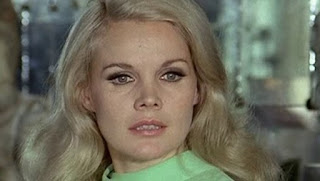 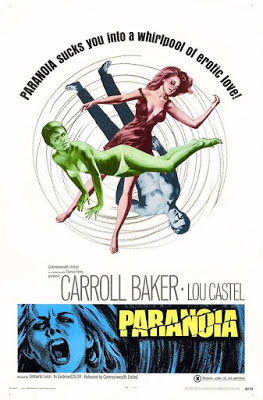 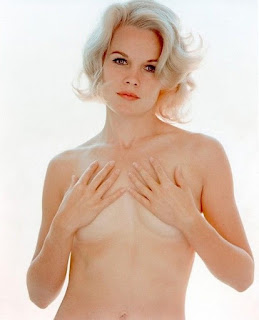 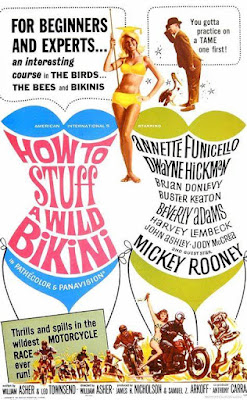 Coming out June 25 is the sixth film in A.I.P.'s "beach party" series of films is 1965's HOW TO STUFF A WILD BIKINI.  Often considered the last official beach party film it was followed by SERGEANT DEADHEAD 1965, THE GHOST IN THE INVISIBLE BIKINI 1966 and a pair of Dr. Goldfoot's and the two of racing themed films.
Frankie Avalon part was regulated to just a cameo here as he was filming SERGEANT DEADHEAD and Dwayne Hickman taking over the male lead with Annette Funicello returning as Dee Dee along with beach party veterans John Ashley, Jody McCrea, Harvey Lembeck and Buster Keaton. Plus guest stars Brian Donlevy and Mickey Rooney and a soundtrack featuring The Kingsman.
You either love these or you hate 'em and as one who loves these I'm really excited for this. Olive had previously released BEACH BLANKET BINGO and MUSCLE BEACH PARTY so hopefully the remainder will follow. 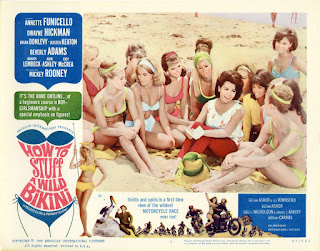 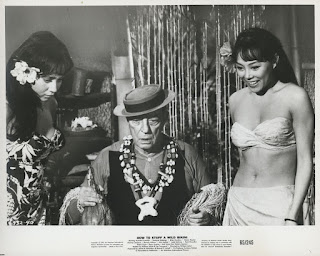 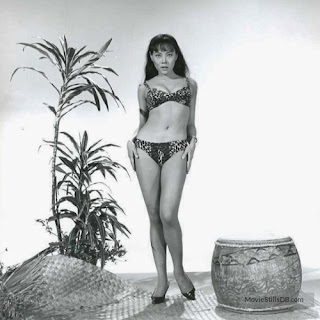 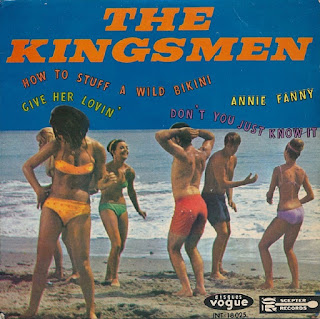 HERCULES IN THE HAUNTED WORLD Coming On Blu 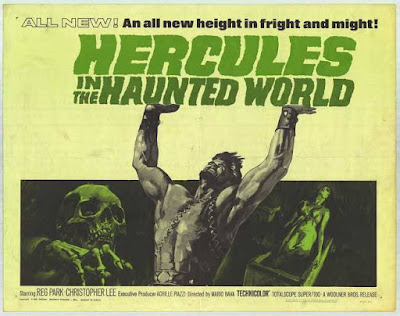 Kino have announced for an Aug. 20 release Mario Bava's hallucinatory HERCULES IN THE HAUNTED WORLD from 1961. Taken from a  2K restoration from the original camera negative, Kino's disc will in include both the  U.S. and Italian versions of the film with Italian version containing Christopher Lee's original voice as it was dubbed for the American release.
Starring Reg Park as the title character (refereed to as Ercole in the Italian version) this was Bava's first color film and stands a great example of his use of color and lighting along making a fantastic looking production on a minuscule budget.
A recent German release included a Tim Lucas commentary, but no word yet on it's inclusion or other extras. 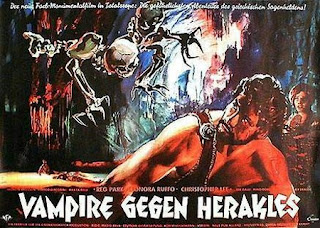 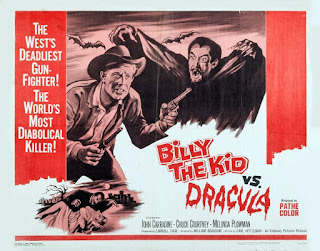 On Aug. 20 Kino Lorber will be releasing BILLY THE KID VS. DRACULA. Along with its co-feature JESSE JAMES MEETS FRANKENSTEIN'S DAUGHTER, it was directed by William Beaudrie who had a career going back to the silent era and these two features were his final credits. Long a staple of those "worst movie ever made" discussions it's a true low-budget oddity with top-billed Caradine playing a vampire count (the name "Dracula"is never mentioned in the film) who sets up shop in an abandoned silver mine (where most of the plot seems to take place) and sets his sights on Billy's fiance as his new bride. Billy was played by longtime Hollywood stuntman Chuck Courtney who had played the Lone Ranger's nephew on the 1950's TV series.
No word yet on extras or the release of its companion feature. 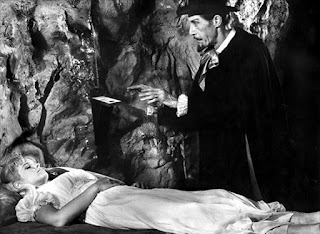 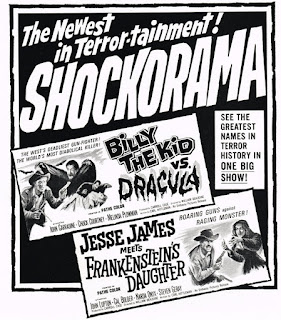 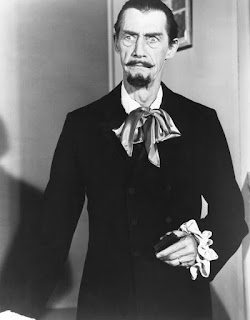 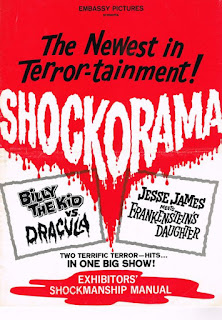 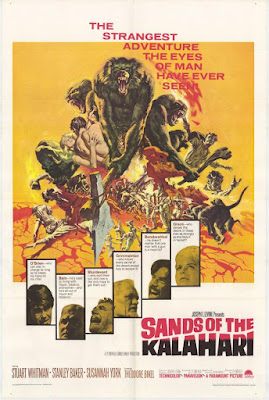 Concerning a disparate group of airplane crash survivors stranded in the desert wastelands of South Africa, its a shame SANDS OF KALAHARI has never really recd. the accolades it deserves. Directed by Cy Endield, its a first rate sweaty and intense adventure film - but was always maddeningly hard to see. Thankfully this was remedied a few years back by a DVD and blu-ray release from Olive Films. It has a first rate cast including Stuart Whitman (in whats by far the best role of his career), Susannah York, Harry Andrews, Theodore Bikel, Nigel Davenport and best of all the great Stanley Baker.
After the success of ZULU American producer Joseph E. Levine approached the production team of Cy Enfield and Stanley Baker to collaborate on another picture. Deciding on a screen adaptation of William Mulvihill's African adventure novel SANDS OF KALAHARI they initially approached Richard Burton and Elizabeth Taylor to star but Taylor refused to travel to Africa and George Peppard and  Susannah York were then cast. Peppard dropped out for THE BLUE MAX and Whitman was cast at last minute.(with he and York most likely for a whole lot cheaper then Burton & Taylor).
Stranded after their initial plane flight is cancelled the group instead hires pilot Nigel Davenport to fly them to Johannesburg. Severely over loading the plane Davenport runs into a huge swarm of locusts during the flight and crashes the plane in the barren desert. Its to the movies credit that we don't get a whole lot of unnecessary back story (and soap opera plot lines) for the characters - we basically learn that Baker is an alcoholic former mine superintendent, Bikel is a college professor & Whitman is a big game hunter (with York's and Andrews story left mostly to the imagination).

After the crash the group initially works together, finding a source of water and some food in a jagged outcropping of rocks that also is populated by a colony of baboons. Whitman with his gun soon begins exerting his alpha male persona as the best person to deal with this situation and begins seeing the other male members as a hindrance to his survival (along with the baboons - who he begins hunting down).  Seeing himself as Adam and York as his Eve, the slowing escalating psychotic Whitman begins whittling down the group, leaving only Baker left to defy him.
The films makes excellent us of its locations with the wide screen photography (by Erwin Hillier - who also shot OPERATION CROSSBOW this same year) making great use of the wide sun baked vistas and shimmering distant horizons. The characters also become more bedraggled as the film progresses (with Whitman especially interesting to watch as he reverts to savagery) and in a nice touch there's refreshingly make up free York, who doesn't look like she stepped straight out of a beauty parlor as often in the case with female characters in movies such as this. All in all a this is great film worthy of re-discovery and perfect to watch on a hot summer's night. 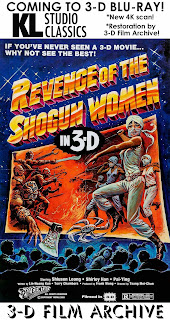 Kino Lorber in association with the 3-D Film archive have announced REVENGE OF SHOGUN WOMEN 1977 (aka 13 NUNS) on Blu-ray and 3D for release later this year.
Reuniting the director (Mei Chun Chang) and star (Ying Bai) of 1977's 3D extravaganza DYNASTY it sells the story of a group of women in 18th century China who band together to take revenge on a group of bandits who attacked their village. I was lucky to see this on the big screen several years ago in 3D and while not reaching the giddy "coming at you" heights of its predecessor, it's still will be a great experience for those with 3D capabilities. Let's face it, this is what you want from 3D - shit coming at you and not just boring depth of field stuff. 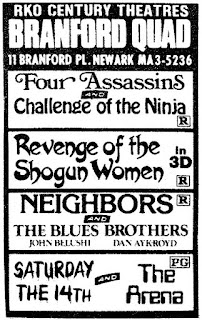 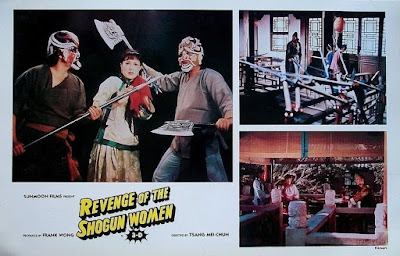 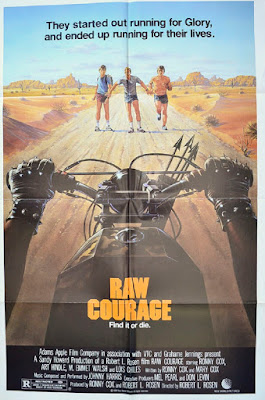 Scorpion has announced the release Robert Rosen's 1984 desert survival take on The Most Dangerous Game for release on Blu-ray for later this year. An HBO cable staple during the 90's, this has been  looong... unavailable on home video, expect for that old VHS release that was a fixture on video rental shelves back in the day.
The only director credit for long-time producer Rosen (FRENCH CONNECTION II), it stars Ronny Cox (DELIVERANCE), Art Hindle (THE BROOD) and Tim Maier as a trio of long-distance runners who run afoul of a sadistic M. Emmet Walsh and his militia army who hunt them through a barren and unforgiving Mojave Desert.
Produced and written by Cox, it sadly has fallen off the radar (not that it was ever on) and is due for a rediscovery, as it's fine action adventure piece that really brings out the hot brutal landscape as the hunted trio spend almost the entire movie running for their lives.